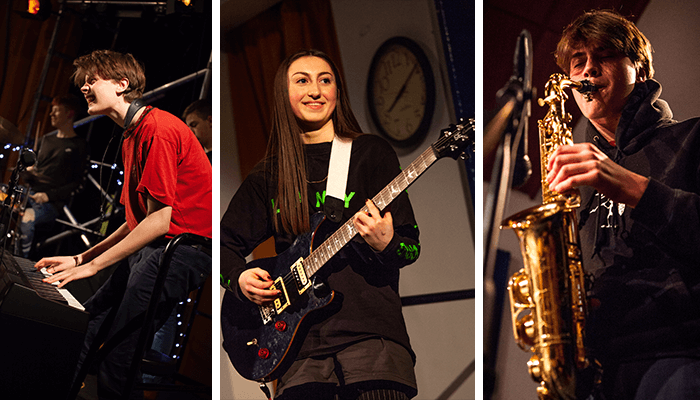 The Big Gig 2019 was a roaring success, everyone who attended raved about how good it was and how it exceeded all expectations, here is one of the performers’ take on the event.

It was late November, in a music lesson, when I first found out about Mr Judson’s plan for the Big Gig 2019. We all knew that Mr Judson’s incredible excitement and commitment, that had recently been applied to the school show, was also likely to be applied to this and would pay off … which it did! I felt nothing but anticipation, and then after Christmas, as we got closer to the event, pure excitement.

This was the first performance of mine (in which I played drum kit for two different groups) that seemed to have a truly professional atmosphere: the dedicated rehearsal process with my bandmates; the build-up; Mr Judson’s thorough and enjoyable preparation; and the end product in the school hall (which I have to say was stunning).

The rehearsal process was incredibly enjoyable. Each Music lesson was dedicated to achieving perfection by analysing our mistakes and righting them with practise. It took about two weeks before my group felt really confident and we began to nail every run through.

During the lunchtime on the day of the event (13th February), I and two others accidentally walked into the school hall and were amazed: the lights and stage filled us with anticipation and we were eager to get up and play. Word had spread quite quickly that the stage was up and by second break there were crowds of between 10 and 20 students climbing over each other to see what had been assembled.

After school on the night of the gig was when my nerves began to kick in: seeing the lights and stage had suddenly made my mind frantic. What if I mess up? What if I drop a stick? What if I fall off the stage? Then I remembered that my pizza was late – many of the performers had stayed behind at the end of the day to prepare and we called in dinner.

The Gig’s main purpose was to raise money for a new recording studio for the school Music Department, costing £5000. Mr Judson introduced the night and with each act announced on the big screen, act followed act, including my own two bands. The first included Khalifa, Christian and Jack from my Year 10 GCSE Music class, and the second band featured Felix (Year 8) on lead vocals, with Otto (Year 11), Joel (Year 12), Zac (Year 13), Mr Judson and Mr Dimond playing the backing.

The Waddesdon Funk Band, a group of the schools’ most talented musicians fronted by singers Lashayah and James, performed twice at the end, leaving the audience with some polished performances engraved in their minds. Lashayah performed several other songs, including Superstition by Stevie Wonder, which was a particular highlight that showcased her talent and raised the roof. We left at the end of the night with the echoes of applause ringing in our ears.Leon, Year 10

Below is an embedded video from our Waddesdon Performing Arts YouTube channel from the Big Gig 2019!